On 14th May 2013, HRH Prince Harry and UK Prime Minister David Cameron yesterday kicked off a global tour promoting Britain as a world class destination for trade, tourism, investment and education as part of the GREAT Britain Campaign. New York City where it was launched, marks the first stop of a global tour that will take in 4 continents and 16 countries, including key markets such as India, Russia and South Korea, over the next 12 months. Two of the eye-catching New Bus for London (NBfL) have been loaned by Transport for London (TfL) to the British government to help promote Britain abroad.

The bus currently now in Singapore and will be here till 28th February. For more information and where to catch a glimpse of the bus, please go to the British High Commission Facebook page. 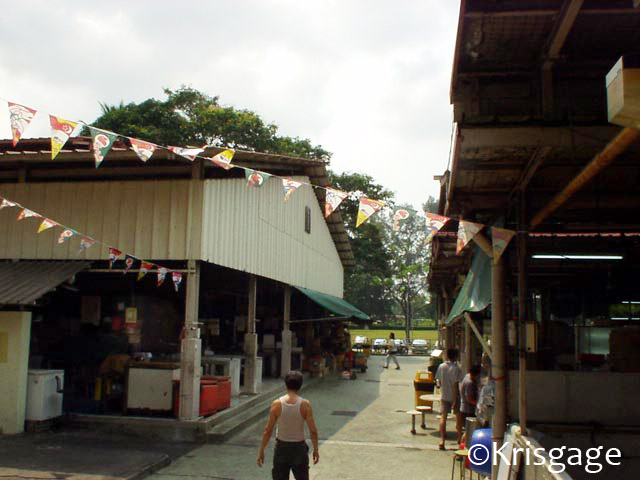 Here are some photos taken on 12th August 2003, into the final days of its operations. Went there with my friend whom one of them stays nearby. 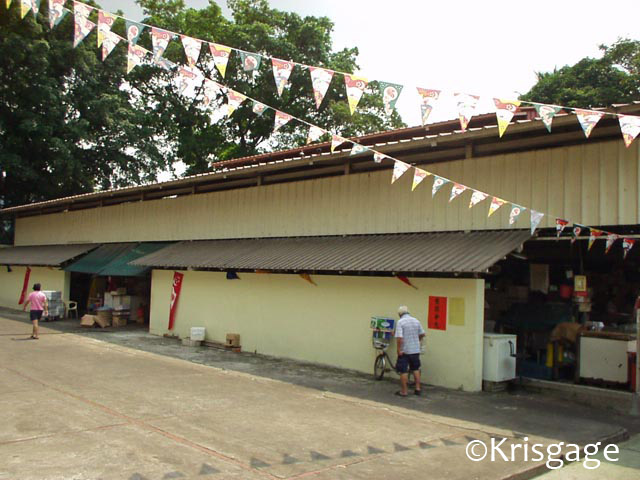 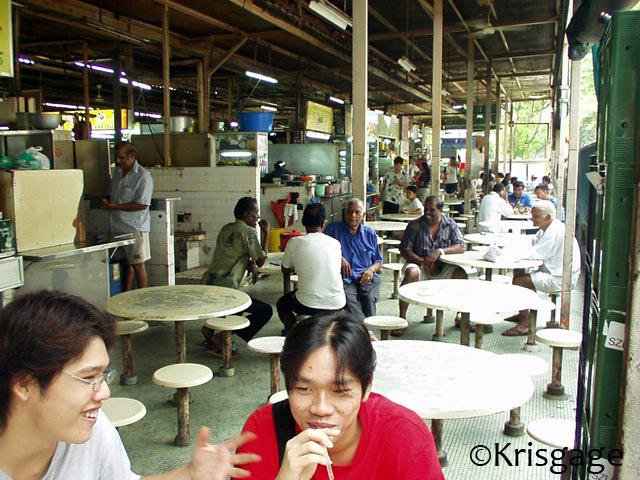 Inside the food centre. My friends are in the foreground. 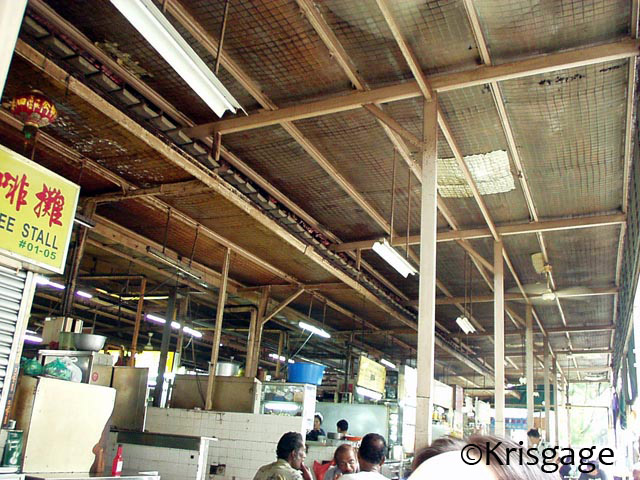 The stalls and the centre structures. 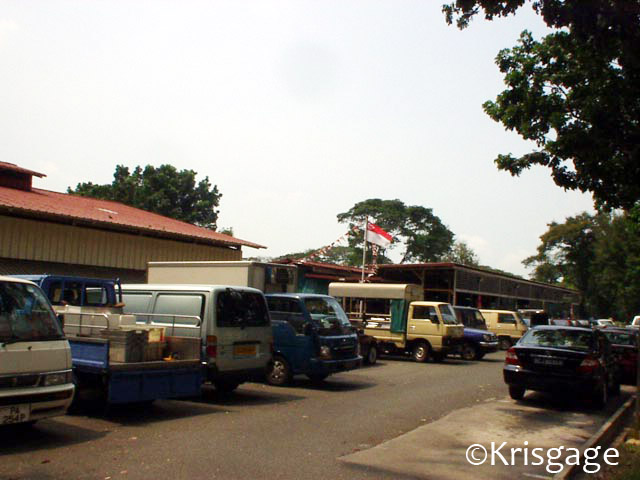 The market and the food centre (far end). 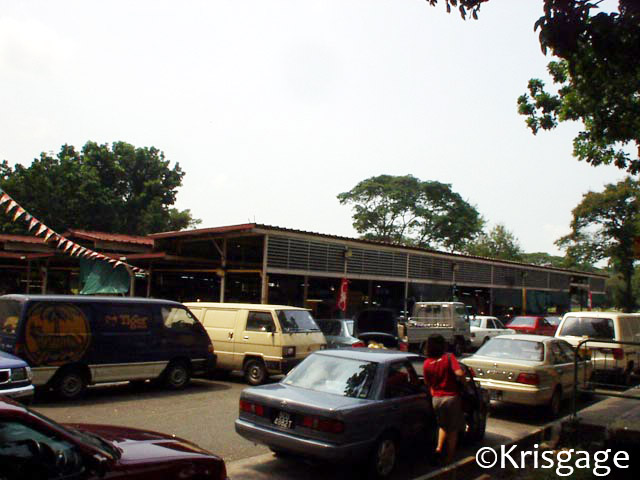 The Kallang Gas Works was built in 1862 to supply the first piped gas in Singapore to enable street lighting. The Kallang Gas Works was under 24 hr surveillance, guarded by Ghurkhas since it was opened. It was given the Hokkien nickname huay sia or "fire city" because of superstitious fears that it might just blow up. There were altogether four tanks operated in the Kallang Gas Works. Nos. 1 and 2 tanks were built with the original plant in 1862 and were in use until they were demolished in 1957. No.3 tank was built before 1900 whilst No. 4 tank was built between 1908 to 1909. Over the years, piped gas became more important as fuel for cooking and water heating, particularly with rapid housing development in the 1960s and 1970s. Its original function for gas lighting faded as electricity took over street lighting in 1906 and the last gas lamp disappeared in 1956.

The Singapore Gas Company serviced primarily street lighting, until 1901 when the Municipal Commissioners took over its responsibilities. From 1901 to 1930, coal carbonising plants were installed and used until 1958 when the gas works was converted to use oil gasification. Small boats carrying coal can be seen along Rochor River. There was a big tall gate for the coal to be transported into the Gas Works.

Here are some photos taken in 24th April 1998, after my secondary school sports day. That day, the sports day ended early and was wondering where to go. Suddenly, an idea came to me. I read on the paper that the Kallang Gas Works was closed down in March, it will be a good opportunity to take a look and have it documented for History. Luckily, I brought my film camera along and have quite a number of empty exposure. When I was there, I went to the friendly Indian security guard and ask for permission to enter the Gas Works. He agreed, probably seeing me in school uniform, must be doing school project.

The entrance, beside the Manmatha Karuneshvarar Temple. 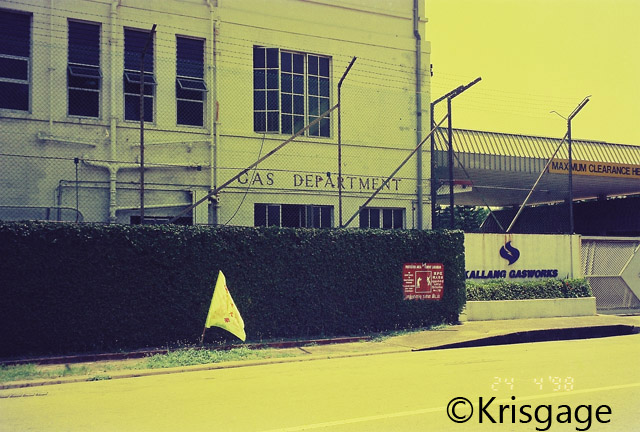 The iconic blue cylinder, which was the gas holding tank. 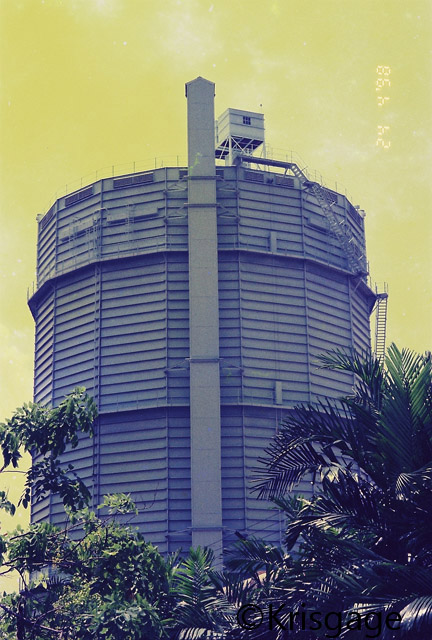 Gasholder No.3 . Commissioned in 1901, the oldest structure remained in Gas Works. 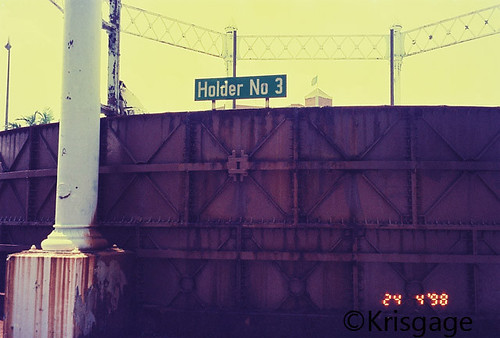 For more photos in the Gas Works, please visit my flickr album at :

In addition, there was actually another Gas Works I know of. It was at Tanglin Halt where my classmate stays. It was near the Ford car showroom and the old Van Holten chocolate factory.

This is the main gate I took recently. 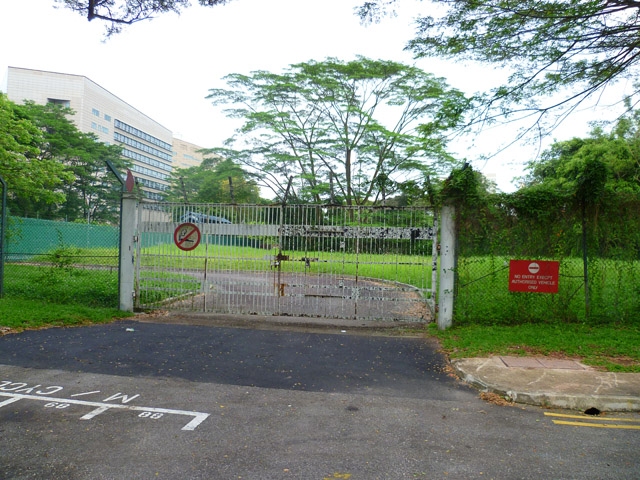 Evident of its past. 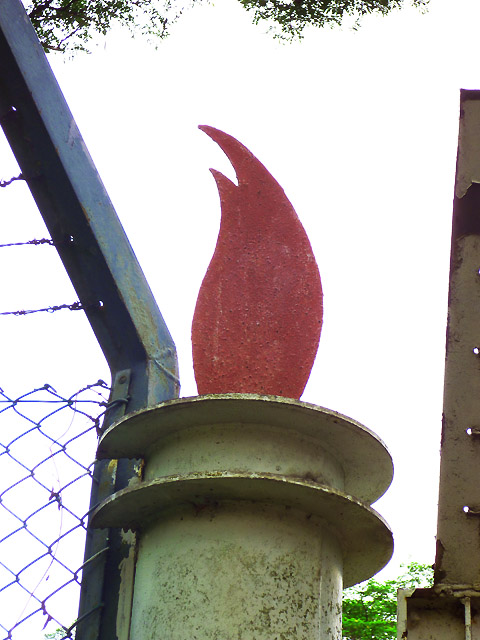 For more informations and photos, please visit this great blog :

This Outpost was discovered by the people from NUS Raffles Museum of Biodiversity Research in 26th June 2002 during their Ridge reccee. It was mentioned that part of it was damaged during construction works taken place during that time.

This outpost stands at the highest point of then Pasir Panjang Ridge, Point 270. This outpost was an important installation as it overlooked area like Alexandra where the British had a military hospital (Alexandra Hospital), Gillman Barrack, and ammunitions, fuel and food depots. Besides that, Jurong, Bouna Vista can be seen from there too.

Here is my album taken from the Outpost. Over the years, nature had started reclaiming its territories, and quite hard to spot it.

World War II concrete pillboxes, built along Singapore's eastern and southern coast, were part of the British beach defences. Positioned at about 550-metre intervals, these pillboxes complemented gun emplacements at the forts, searchlight batteries, anti-tank and anti-boat defences, mines and barbed wire along the coastline. The pillboxes were mounted with machine-guns manned by machine-gunners to repel attacks from the sea and the surrounding terrain.

This machine-gun pillbox lay within the World War II defence sector of the 1st Malaya brigade. It was likely used by the Malay Regiment in the fierce defence of the Pasir Panjang Ridge against the onslaught of the advancing troops of the Japanese 18th Division.

More about the Battle of Pasir Panjang , you could look into here :

On to the photos :

The front " window " , most probably a Bren Gun mounted here.

The rear of the pillbox. Port holes could be seen on the wall. Probably infantry manning the pillbox will stick their rifles through it for the rearward defense.

Entrance to the pillbox.

Side view of the pillbox. Showing the wall.

In this clip, the bus SBS 2724 H serving 74 at that time, bus model is Volvo B10M-61 Mk IV with Volvo DH10A engine coupled with 3-speed automatic Voith DIWA 863.3 gearbox. This clip recorded when the bus is running along Bukit Timah Road, stop and go traffic, then going up the slope at Clementi Road and stops at bus stop opposite Ngee Ann Polytechnic.

If you going to use it, please inform me and credit me. Thanks.

After getting 4 Tomica from the flea market at China Square, I decided to head down to the near OG to check out if there are any new Tomica. To my surprise, I found this bus from Tomica long series, Tomica 138 Locomotive Type Bus Seishungo. Immediately, I decided to buy it. When I got home, I sat down and went to find out more about this interesting looking bus. This is what I got from Wikipedia and the links inside it.

This steam locomotive model bus, is a converted trailer bus from medium-duty truck, Hino Ranger. It operates for a spa center located at Hinode, Tokyo, 生涯青春の湯 つるつる温泉 (ひので三ツ沢つるつる温泉センター). The name for this locomotive type bus is 青春号 ( Seishungo ).

The first generation trailer bus for this service was converted from Hino Ranger KC-FC2JCAD, introduced in 1996. It was registered as 八王子22あ・173 for the front cab and 八王子22け・・・1 for the rear trailer. It was later withdrawn in 17th September 2007 due to emission regulations. The second generation trailer was converted from Hino Ranger BDG-FJ7JJWG. It was registered as 八王子200か11-24 for the front cab and 八王子200け・・・4 for the rear trailer.

This trailer bus was built and converted by Tokyo Special Coach, 東京特殊車体. The passenger trailer at the rear is actually wheelchair accessible. It has wheelchair ramp with non-step structure. To produce smooth and calm feel, its interior is wood like with wood frame seats.

Photos of the Tomica replica :

Photos of the actual bus :

Here are some photos taken from my recent urban exploration trip. Used HDR treatment and further post processing at Photoshop.

Further in researching about this place, I believed this used to be Sungei Buloh airfield built and used by the British and Commonwealth forces during World War 2. Most of the photos captured shown here were actually British military airfield buildings.

The below photo titled " Rotten to the core " was called Nissen hut. a prefabricated steel structure made from a half-cylindrical skin of corrugated steel. The Nissen hut was used for a wide range of functions; apart from accommodation, they were used as churches and bomb stores.

Rotten to the core 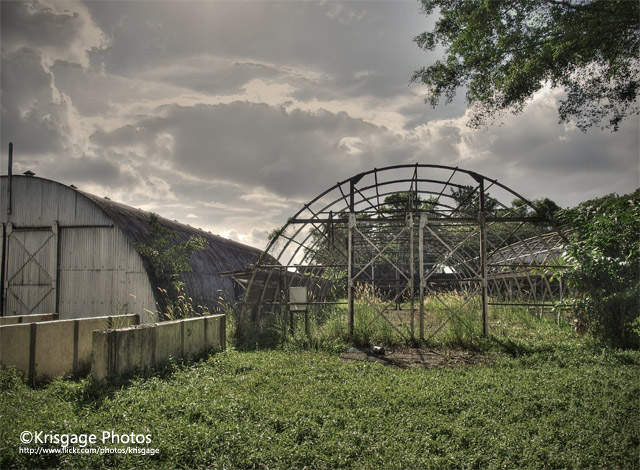 The below photo titled " Hanger of doom " was Bellman Hangar. The Bellman hangar was constructed on a unit system of rolled steel sections, both walls and roof using the same standard units joined at the junction of wall and roof by a standard corner unit. 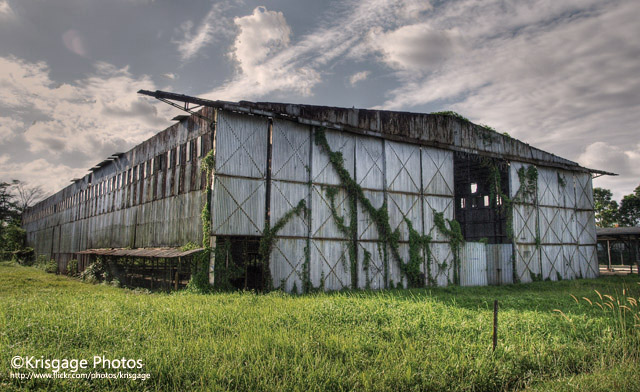 This is how a complete and actual Nissen hut looks like. 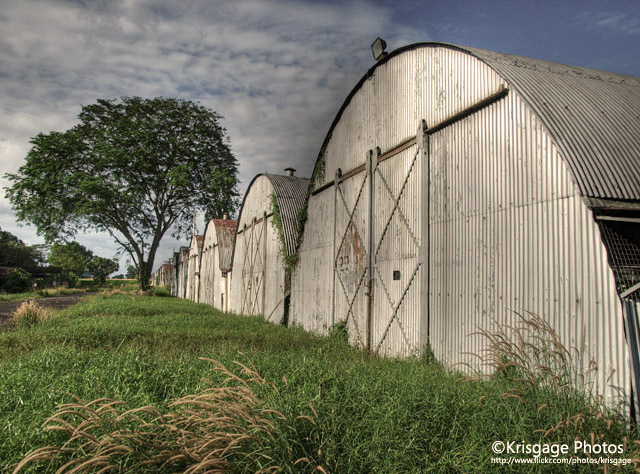 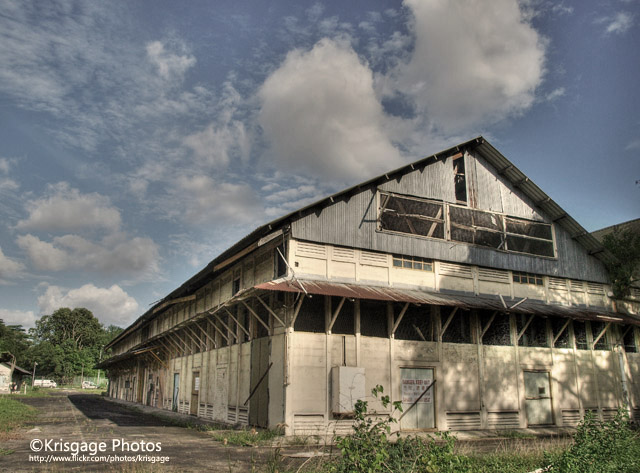 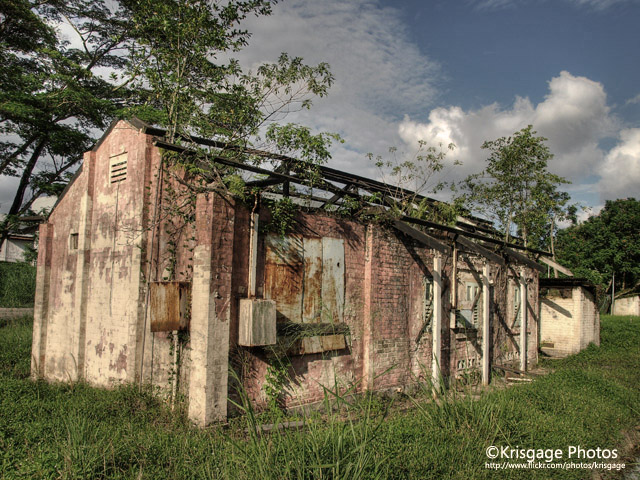 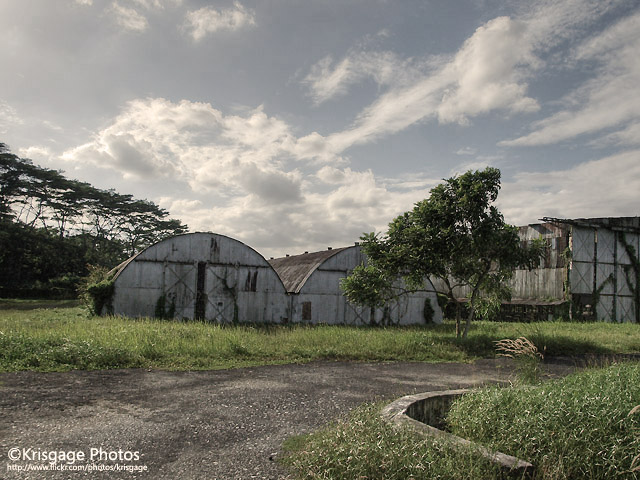 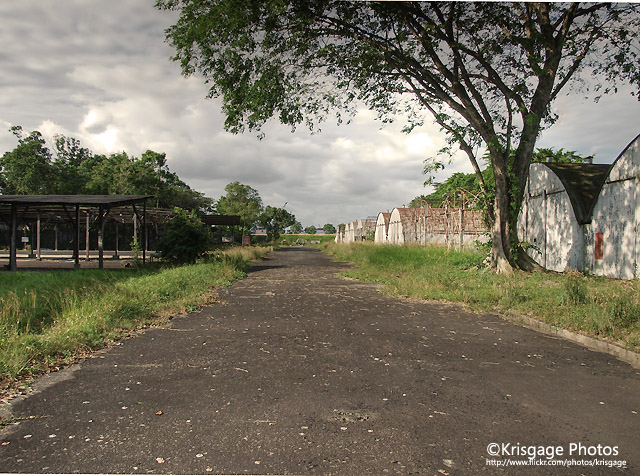 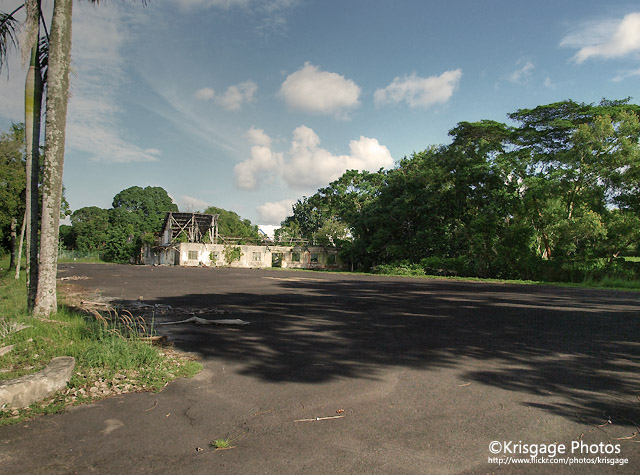 When I was digging for old photos of Walter Alexander bodied Mercedes Benz O.405 photos in my archives, I found a few rare photos of Mercedes Benz O.305 interior photos. It was taken at Clementi Interchange. The bus was SBS 7109 B , doing Service 165 at the time the photos were taken. It was then the workhorse of Singapore Bus Services (now SBS Transit) along side with Leyland Atlantean and Leyland Olympian. It was retired in late 2001. I remember riding it on 165 and 74, the characteristic howl from its hub reductor and the rattling of window panes while going over the humps. I got the shots of SBS 7110 X which broke down infront of Singapore Polytechnic. It was the time where I got chance to shot its engine bay. I need to dig for the negative to scan it. Here are some technical details about this bus.

Its a nice weather today. Just after rain, flowers, plants and leaves still have water droplets. I decided to try out the I96U enlarger lens for close up/macro shots. All taken at Orchard Central Sky Garden. Here we go !